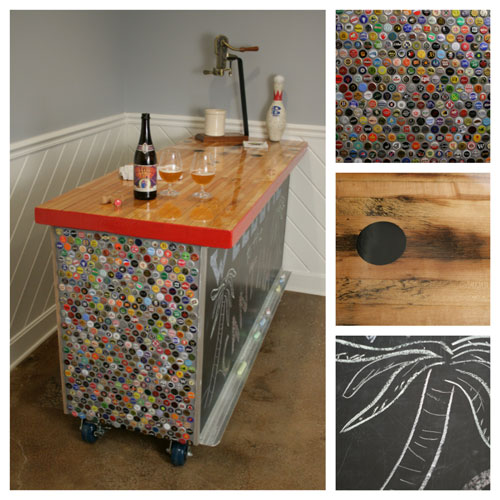 Finished! (Well … almost, but we will get to that in a minute.) For the past year I have been slowly constructing a repurposed bottle cap bar.

It all started when a full bar (see picture below) was removed from a room during a home remodeling project. The counter top was destroyed in the process and really could not be reused. Instead of disposing of the base, it was relocated to the basement.

Inspiration struck last December to convert the counter into a movable counter / bar. I decided to construct the project with as many recycled or found objects as possible.

First, heavy-duty casters (unfortunately I could not find used) were added to the bottom so the bar could easily be moved. With a stained concrete floor we could then locate the bar to any location for various occasions and purposes.

The front face of the bar was discovered at a local architectural salvage warehouse. An old chalkboard was purchased for for $10. It was larger than necessary, but it easily cut to size (not slate). The chalkboard was secured to the front with a few bolts creating a perfect space for announcements or kids to draw pictures. 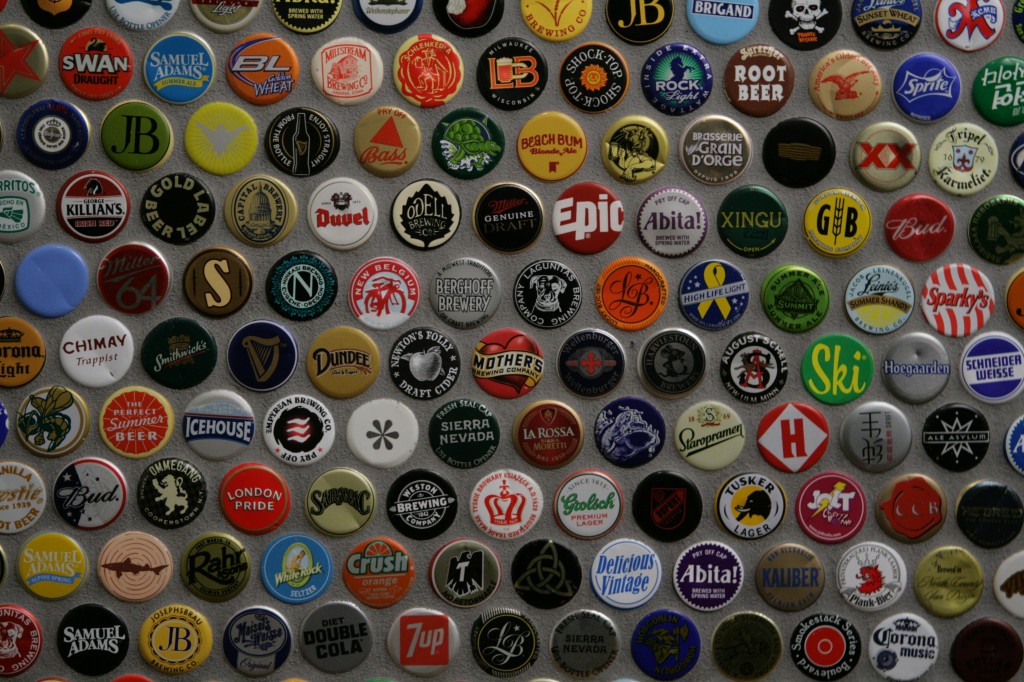 My wife found a picture on Pinterest displaying tiled bottle caps, the perfect solution for the sides of the cabinet. Measuring determined exactly 500 unique (why not?) caps  would be required for each side.

The hunt for original bottle caps began. I asked for caps from bars and restaurants. Friends and relatives made contributions. One friend even found caps in Australia. I tried new beers and sodas simply based on the lid. The early stage was easy, but became more difficult at the 350 mark. The collection, however,  was still complete in about 6 months.

I secured the bottle caps on a thin piece of MDF with mortar. After all 500 were secure, a protective spray clearcoat automotive enamel was applied. The MDF was screwed and glued to the side of the bar. Grout was mixed and applied to the surface, filling in between the caps.

The 2-1/2 inch thick counter top was discovered on Craigslist. A bowling alley had been removed, and portions of the lanes were being sold. The portion purchased was a little longer and wider than necessary and heavier than an elephant. Eventually I was able to saw off the sides to achieve the necessary size. The edges were a little rough, so they were painted a contrasting red. The top was sealed with a epoxy glaze coat to create a smooth surface.

Last week the bottle cap bar was complete. Well, almost complete. There is another side for which I need 500 more unique caps. If you would like to donate or trade bottle caps write summerbrewreview(at)gmail.com. 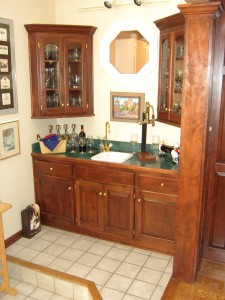 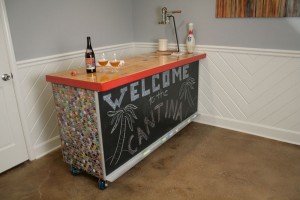